“Geometry Dash Subzero” is the up-to-date of the series by RobTop Games and it recently appeared on the Google Play Market.  Similar to Geometry Dash Meltdown, that release was created as a mini autonomous edition, including three levels on winter theme and the Bossfight, MDK, and Boom Kitty soundtracks.

One of the main advantages of the newest edition is that it is absolutely free. There are advertisements included, and they appear very often. However, they are pretty short despite of being numerous. Unfortunately, it’s impossible to remove the ads. But if you buy the original Geometry Dash at a price 1.99 USD, you will have a premium title. But keep in mind that each of the releases are separate games and playing new Geometry Dash Sub Zero levels means tolerating the ads.

The gameplay is probably something you could anticipate from that release. Your task will be tapping on the display and jumping over the obstacles and landing on special platforms, to the sound of the original soundtrack. The game requires you to react very quickly, so pay attention to the time, while you are going to have a lack of it for making a progress. Only lots of practice can help you in that game. There are no other tricks.

Geometry Dash SubZero is a perfect game if you search for a cool challenge requiring you to be attentive in the whole process of the game, and enjoy a cool soundtrack. Ads seem to be irritating sometimes, and there are not so many levels, but the greatest advantage of that edition is its price, it is absolutely free for anyone.

So, Geometry Dash is back with a new adventure for you! Get ready for a real challenge! It won’t be that easy! A new crazy gameplay is waiting for you and is going to make your fingers hurt! However, along with fingers ache your experience will boost as well, and you will be able to get to a desired finish. Of course, if you are patient enough for that. Unlock unique SubZero signs to open new characters! You can use a training regime to increase your skills in that game! 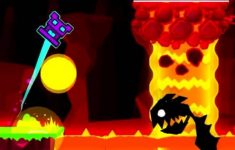